Another Clip From Monster Fu Released

The Disney Channel Germany YouTube channel released yet another clip from Monster Fu/Furious Fu. At this point we practically have the entire episode. This is in German so I will leave the translation, courtesy of Leviaana on Tumblr, down below.

Kwamis (muffled): He seemed as strong as a tiger!
Kwamis: What an extraordinary (inaudible)!
Kwamis: Is there any cake left?

Marinette and the Kwamis: AAAH!

Barkk: Told you I had a bad feeling there.

Su Han: Why are you in possession of the mother-box, young lady?

Marinette: But- I’m the guardian of the miracle box.

Tikki: He was responsible for it before the incident happened that Master Fu had caused.

Marinette: How did you find me?

Su Han: The scepters of the guardians are equipped with a compass. With them, we can find the miracle box at any given moment.

Marinette: That’s not fair. Why didn’t I get a scepter?>:(

Su Han: Because you’re not a real guardian. Everything is a major misunderstanding and the improper form of the miracle box confirms that.

Marinette: I don’t understand. Master Fu entrusted me with it.

Su Han: FU?! You mean Wang Fu, also known as chicken legs?! The student who was incapable of not eating for a day or doing 1000 finger-pushups? Fu should have never become a guardian in the first place. That good-for-nothing never managed to fulfill the hopes we had in him.

Marinette: Master Fu made mistakes when he was young, but he bravely protected the miracle box for years. He even sacrificed himself and erased his memory to save us and now, he’s a fantastic painter.

Marinette: By the time I received the miracle box, Master Fu had already lost Nooroo, Duusuu and the Butterfly and Peacock Miraculous.

Su Han: He even lost a few Miraculous?! He’s more incompetent than I thought. PLAGG! Young lady, where is Plagg?!

Marinette: I know that! Chat Noir is his owner.

Su Han: And who is Chat Noir?

Marinette: Well-, I don’t know. We were supposed to keep our identities a secret.

(Su looks at her earrings)

Su Han: So… this is the modern world. Protected by some reckless fools. Guardians must never wear a miraculous! A few miraculous are missing and Plagg is flying around freely. That was the end for the dinosaurs and dragons. Does no one think this is unsettling?! Ugh! That’s enough! Come on, Kwamis! Back in the Miracle-Box you go!

Marinette: What are you doing?!

Su Han: I’ll remind you of a few important rules you broke. Rule 14: Kwamis are not allowed to live outside of the Miracle Box. Rule 52: Guardians mustn’t ever lose a miraculous! Rule 133: A guardian is not allowed to wear a miraculous under any circumstance!

Marinette: But Master Fu wore one himself!

Su Han: Of course! That confirms what I’ve been saying this whole time. Neither you, nor Fu, rise up to the challenge of being a guardian because neither one of you respected the important rules of our order. Not to mention that fact that no child should ever be the owner of kwamis! They are powerful cosmic beings! It’s important to be able to control them and that’s something you’re very obviously not capable of doing!

Miraculous Animations on Instagram released the clip with translations embedded on it. You can check that out below.

New Trailer and Date For Protection

New Trailer and Date For Perfection and Emotion 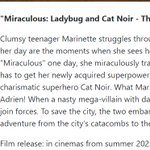